To reduce data transfer, sounds are not downloaded by default. Choose your preferred setting:

Working with the Chord Matrix/Progression Tool

This part of Oolimo contains the most common chord progressions that you can find in countless pop songs or jazz standards. Furthermore, it contains snippets of songs respectively standards that are exemplary for the use of certain progressions in a larger context. Some of the progressions are repetitive, others are played only once and then may be followed by other chords.

Each of the progressions is shown in every single key and there are mostly several variants using different chord shapes. You may notice, that in some keys there are more variants than in others. It's always helpful to learn each progression in several keys.

Why Is The Key Displayed In Red?

The red colour is a double-accidental warning. By touching the key it switches to its enharmonic equivalent, e.g. D# ⇆ Eb.

In most cases, flat keys should be prefered over sharp keys because in sharp keys double accidentals (##) appear more frequently. In the key of Eb major For example, the maj7 is a D, while in D# major it would be a C##! Of course, you will mostly replace those troublesome notes with their simpler enharmonic equivalent, but the use of flat keys is mostly advisable. Just between F# and Gb major, there is no big difference when it comes to double accidentals.

If looking at the matrix frightens you and you haven't dealt with roman numbers and scale degrees before, just ignore the matrix for now and go to the list (button "list" or button "all progressions"). Choose one of the listed progressions and start practising. After going through a couple of chord progressions in several keys you'll quickly understand the matrix.

The matrix is not only a useful tool for finding chord progressions, it also helps to learn which other chords are commonly coming along with a certain chord.

The matrix contains only chords that are actually present in at least one of the chord progressions that come with the app. Some more chords may be added with more progressions in future updates and the way the chords are arranged may also slightly change.

The chords of the matrix are notated in a universal form. They don't show extensions like 9, b9, #9, add9, 11, b13 or 13. The examples however may contain more complex variants of the basic chord with added tensions and modifications. A V7 chord in the list may therefore appear as V9 = V7(9), V7(#9), etc. in an example in the chords view.

The chords of the matrix can be displayed in a general form with the root/bass as scale degree (roman numbers, e.g. Imaj7, IIm7) or in the selected key (e.g. Cmaj7, Dm7).

The coloured first line serves as a reference for your orientation. It shows the roots of the selected key while the chord buttons display the scale degrees of the roots (and bass notes in slash chords). With a touch on the dedicated button ( C D E ⇄ I II III ) you can display the scale degrees in the first line and root/bass names in the selected key on the chord buttons.

By pressing one of the reference buttons you can select the whole column (and deselect by pressing the button again). 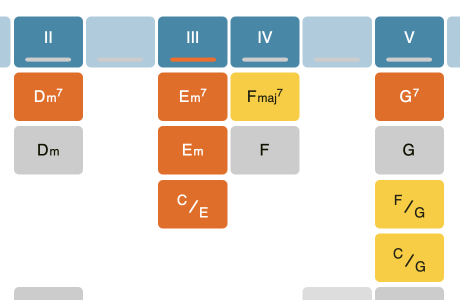 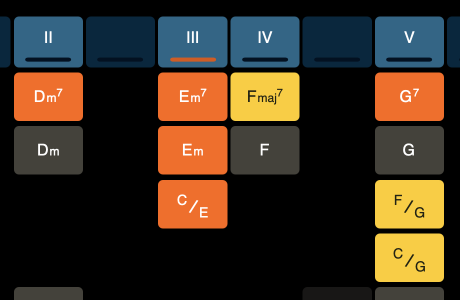 In the shown example the selection means:

The moment you select a chord, other chords will be highlighted (with a different colour). These are the chords that appear in at least one of the chord progressions (that are included so far) together with the selected chord(s) and therefore these are the chords you can choose from if you continue selecting.

Structure Of The Matrix

The firest line is the reference line and has already been described above (View).

Let's start on the THIRD line: here you can find the diatonic triads of the selected key. All chord tones are tones of the key respectively major scale, because they are just built by stacking two 3ds over each root, using minor 3rd or major 3rd, depending on the scale degree. For example, in C major: C-E-G (C major chord), D-F-A (D minor chord), E-G-B (E minor Chord), F-A-C (F major chord), etc.). There are several more or less common standard chord progressions using these chords, but you can't do too much wrong trying all kinds of combinations. On the VIIth scale degree, you would find a diminished triad. In practice (especially on the guitar) diminished triads are always played with a diminished 7th (dim7) or a minor 7th (resulting in an m7b5 chord). That's why there's no VIIdim button in this line ...I will add one if I find a good example.

On the SECOND line, the chords have one more (major or minor) 3rd stacked on their top (5th). These are the diatonic 7th chords of the selected key respectively major scale. Together with the diatonic triads, we call them all the diatonic chords of that scale. Because the 7th adds some tension to each chord (especially in a V7, but also in a maj7, not so much in an m7 chord), that is expected to be resolved in a certain way, some progressions sound great while others can be very unsatisfying. Still, you can try a lot of great progressions by experimenting.

Especially in pop music, folk/songwriter-genre, etc., certain diatonic chords are often replaced by slash chords. Examples are IIm I/III IV instead of IIm IIIm IV (IIIm replaced by I/III) or I V/VII VIm7 instead of I VIIm7b5 VIm7 (VIIm7b5 replaced by V/VII), instead of a V7 chord you'll often find IV/V which equals a Vsus9 (=V9sus4) chord.
We also find chord here that can be played over a pedal bass (several chords over the same bass note), like e.g. I IV/I V/I I (C F/C G/C C or F Bb/F C/F F or G C/G D/G G,…).

The chords in the following lines mostly contain tones that are not part of the selected key respectively major scale. Provided with that kind of extra tension they only occur in certain harmonic contexts, often following respectively leading/resolving to certain "predetermined" chords:

If you touch a progression in the list, you'll immediately see the chords in the chords view. If you go back, you'll see your progression highlighted with a coloured background.

If you change the key in the list view, the key also changes in the other views (chords view and matrix). In the chords view, you'll then see the 1st variant of that key. The reason is that different keys may have different numbers of examples (variants) for each key. That also means that variant 3 may be variant 4 or 2 in another key or not even available anymore (because it goes too high or too low on the fretboard).

Display The Chord Diagrams Of A Progression

To display the fretboard diagrams of a chord progression, you must select a progression in the list view. The displayed chord progression remains in the storage if you close the app or navigate to a different sub-application of the Oolimo app like e.g. the chord finder or help section.

For the most chord progressions you can display several variants with different chord shapes. Use the arrow buttons to navigate through the variants. Between the arrow buttons you can see which variant you actually see and how many are offered in the actual key. The number of variants may change in a different key, because some tones may fall below fret zero or would become hard to reach high up on the fretboard.

Because the number of variants may vary from key to key, you will always see the variant number one after changing the key. That might be annoying when trying to change the key of a certain variant and I'll work on a better solution... 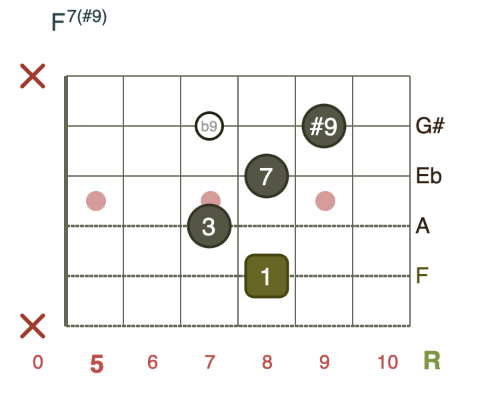 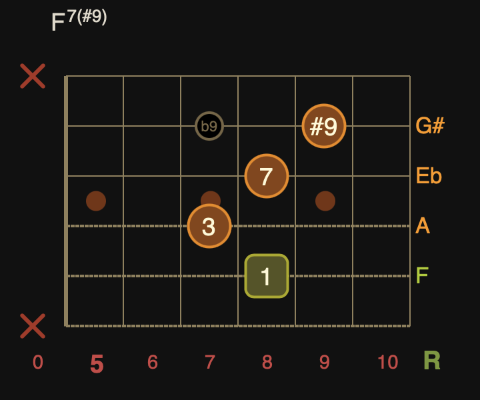 In some chord shapes, you'll detect one or more optional spots (smaller, round and not filled with colour). These tones can be played or omitted arbitrarily. You can also play them temporarily to create a little melody within the chord accompaniment. In the shown F7#9 you may e.g. play the #9 first and then play the b9 which resolves perfectly (by a half step) into the 5th of a Bbmaj7 or Bbm7 on the 6.fret.

The text ("spot info") on the optional spots is only displayed from a certain spot size and up. If necessary, you have to enlarge the fretboard diagrams by using the magnifier icon (+).

If the "super correct button" is activated (green), tones with double accidentals (bb,##) as well as E#, B#, Cb and Fb will be displayed correctly that way instead of been replaced by their enharmonic equivalent (which is theoretically incorrect, but easier to read).

"Spot info button": toggles between note names and intervals being displayed on the spots.

In the chord progression tool, you can toggle the orientation of the fretboard diagrams between horizontal (here default) and vertical.

The orientation for right-handed and left-handed people can be changed in menu bar and applies to all fretboards on the website.

The following aspects can be a reason that selecting chords in the matrix can result in some progressions falling through the grate. Sometimes you may have to start searching with some slightly modified selections, e.g. one time with pure minor chords, onw time by selecting m7 chords, another time with both selected (AND/OR relation - described above).

Please understand the given chord progressions as examples and avoid trying to derive rules from them, like "in this progression, you always write Gsus9, while in the other one it's always F/G" or "in that progression it's pure minor, never play m7 here"...

Music is art, is creative, allows different approaches, variations and perspectives. A tool like this can hardly do justice to all of that. There's for sure a lot of room for impprovements in the future, but I hope that the chord progression tool is already very helpful and serves you well by now!